Batman Forever had a video game for just about every console available at the time.

While the Sega Saturn and PlayStation got a port of the hectic arcade game, the Sega Genesis, Game Gear, SNES and Gameboy got a really sluggish scrolling beat-em-up from Probe Entertainment/Acclaim.

It was a chore to play and had very fiddly unresponsive controls. That said, it had an awesome trailer for the game that was on the VHS release of the film in the forthcoming attractions.

One thing to note is that at lot of people think the shot of Batman and Robin on a pillar at the end is taken from the deleted ending of the film.

It's not, I'm afraid - it's just a shot they did with two stuntmen on a set specially for the game trailer. Neither Joel Schumacher nor any of the movie cast and crew were involved.


And here is a promo showing a little more of the gameplay.


Urgh, remember those terrible, noisy, cheap handheld games from Tiger? The ones with really repetitive gameplay and headache inducing music.

Well, in the 1995 they tried to make them more interesting by turning them into a wearable headset where you'd view the game on a little screen over your right eye! Yeah, they didn't last very long. 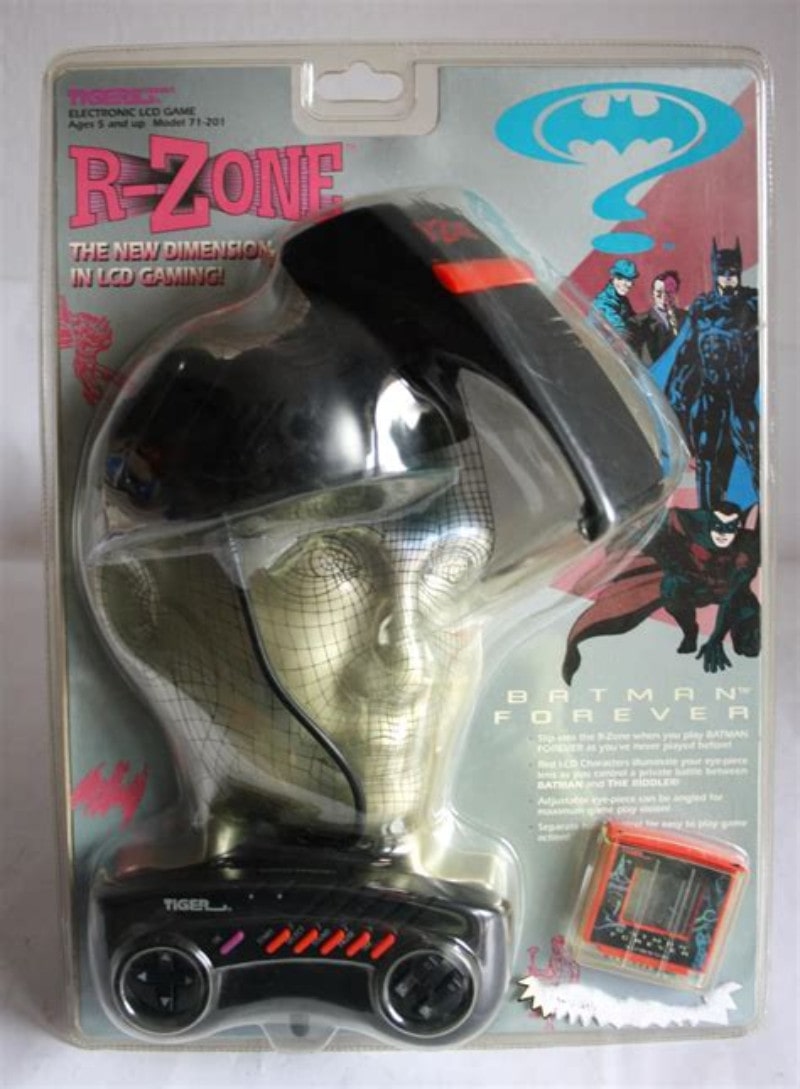 I remember these being on the toy shelves in 1995 and desperately trying to save up to buy one. I thought they looked amazing! Thankfully, they took them away before I got enough money. I'd have been furious if I wasted it on this.

Here's a sample of how the Batman Forever R-Zone game plays in case you're curious.


And finally, here's some posters for the Acclaim game. 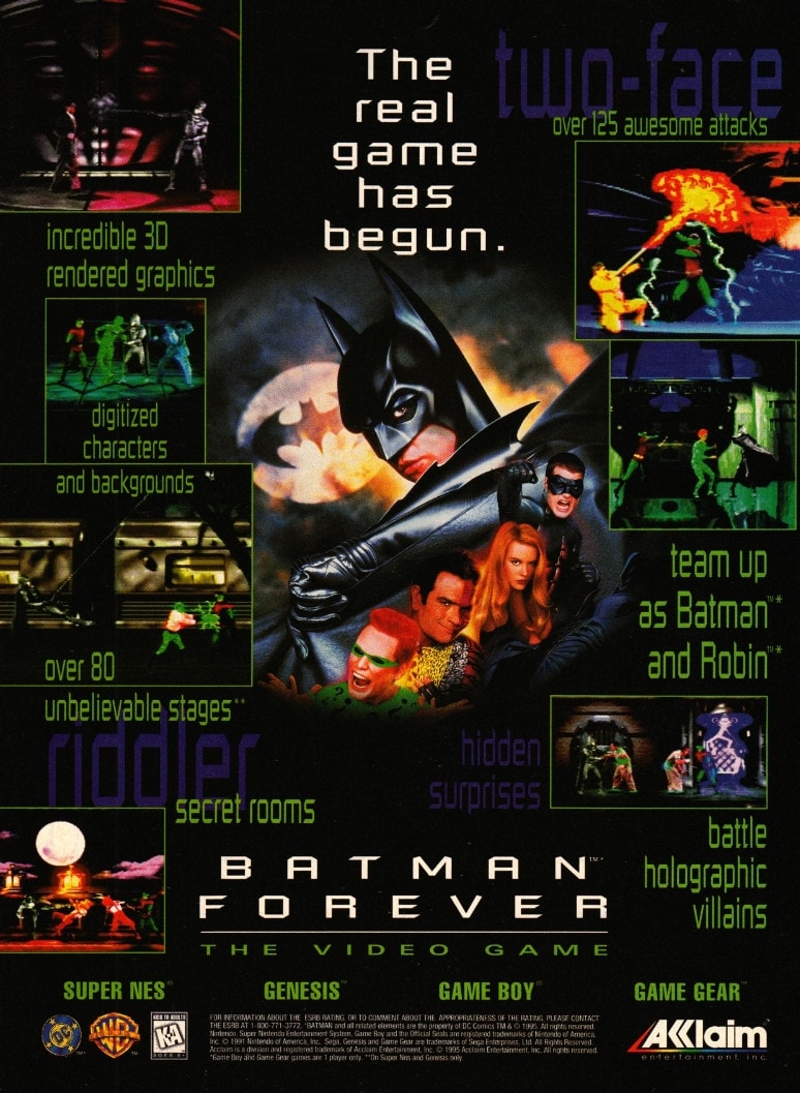 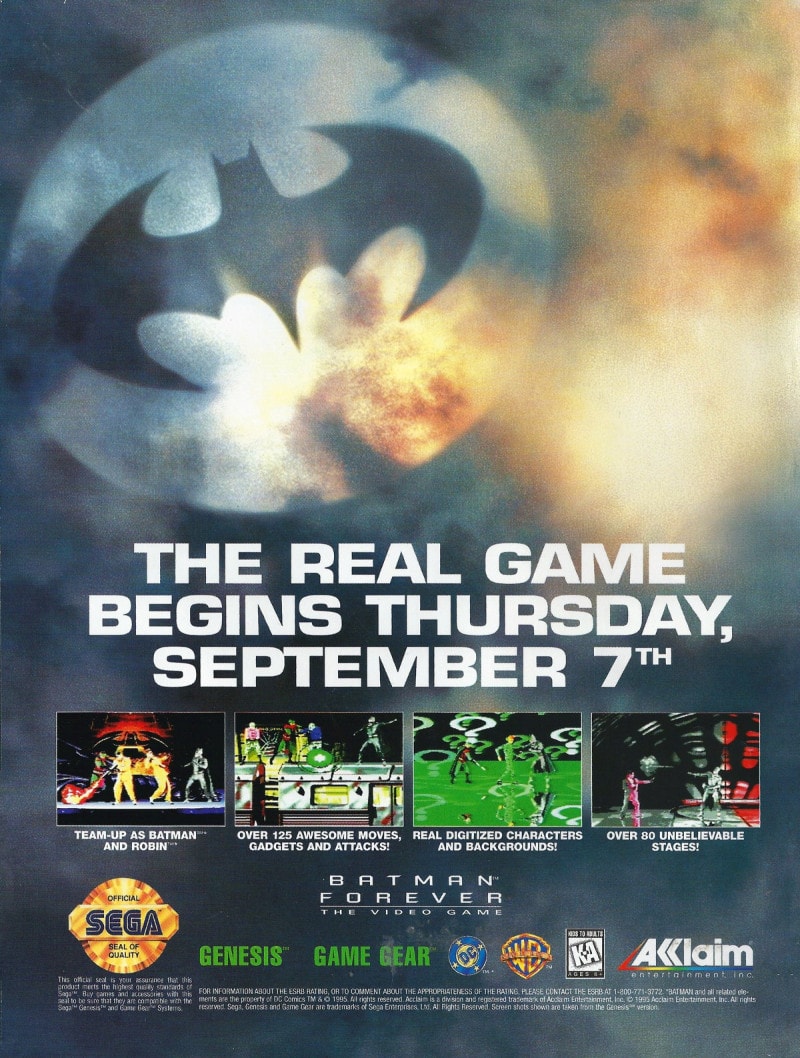 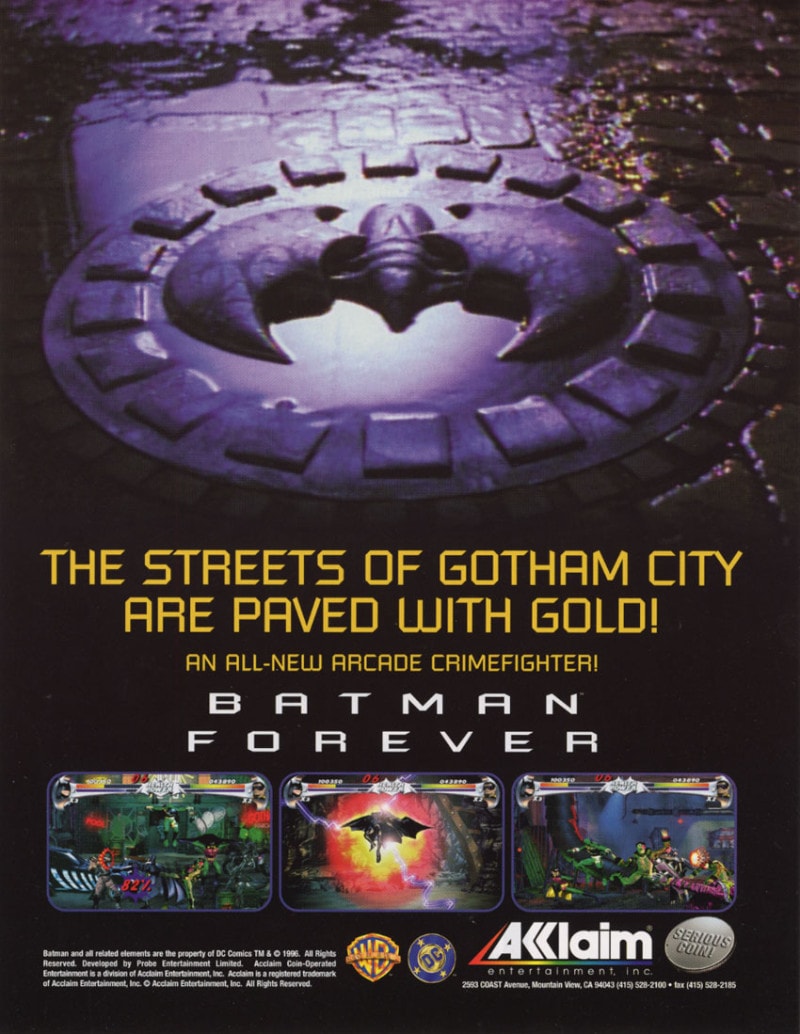 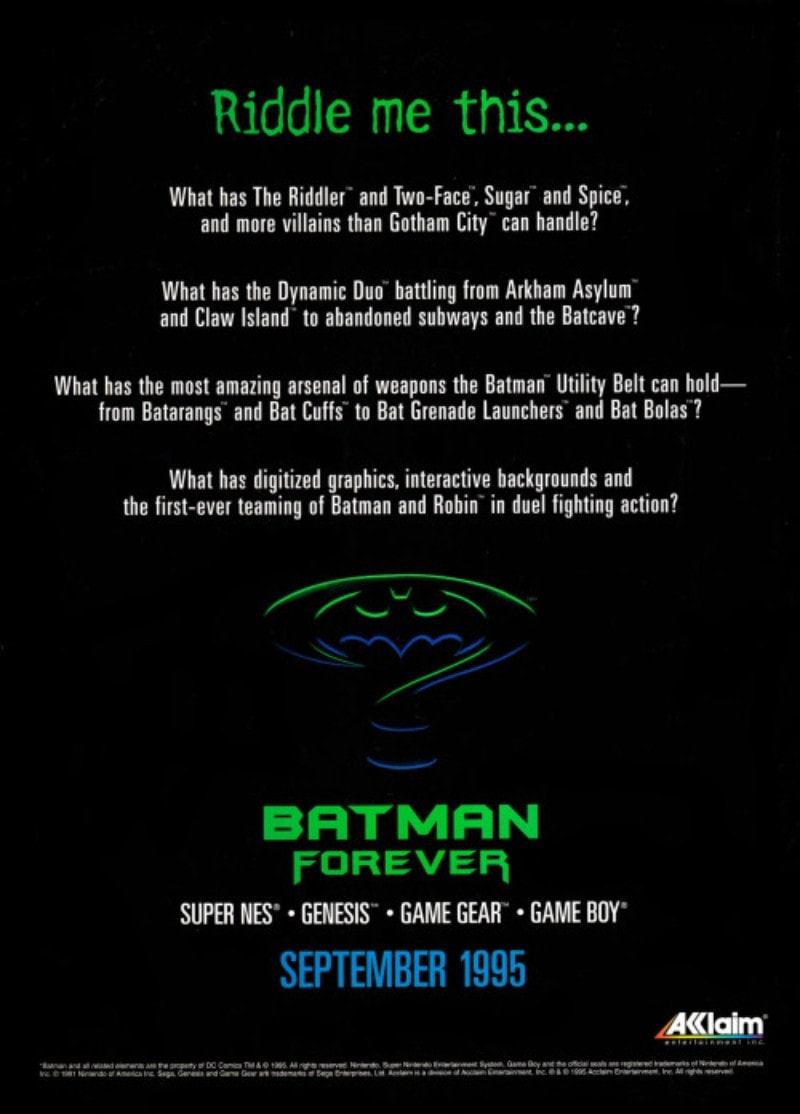 at May 25, 2018 3 comments:
Email ThisBlogThis!Share to TwitterShare to FacebookShare to Pinterest
Labels: Video Advertisements, Video Games

Slightly random. Don't remember seeing this at all in the film but it's apparently the front cover for a brochure for the Circus. I guess maybe Chase had one tucked under her arm. Just one of those little background elements that don't make it on screen.

Sort of weird that the face on the front is basically Two-Face, no? 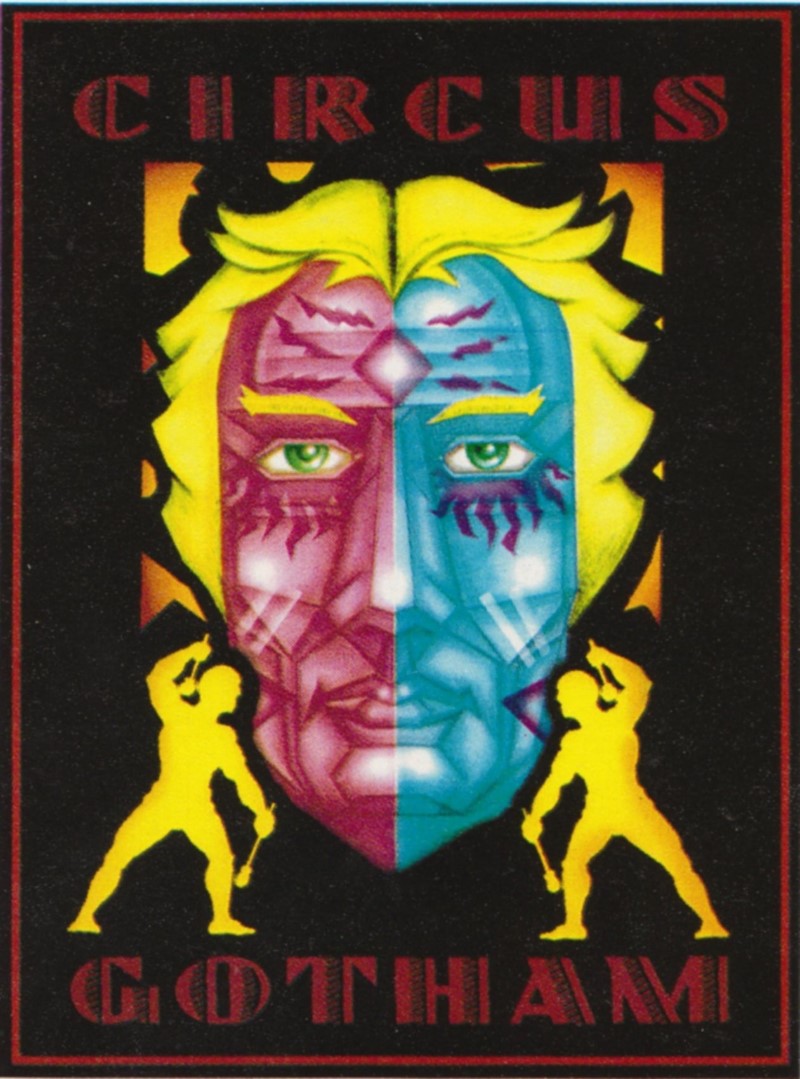 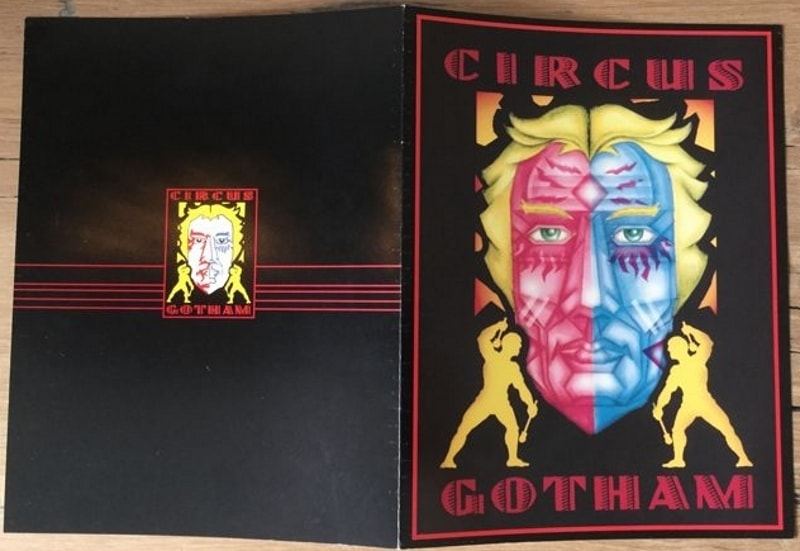 at May 18, 2018 No comments:
Email ThisBlogThis!Share to TwitterShare to FacebookShare to Pinterest
Labels: Circus poster, Misc content

Bill Warren catches up with Michael Gough in Starlog #215 to talk about the transition from Keaton to Kilmer in Batman Forever and then focuses on his early career in British horror films. 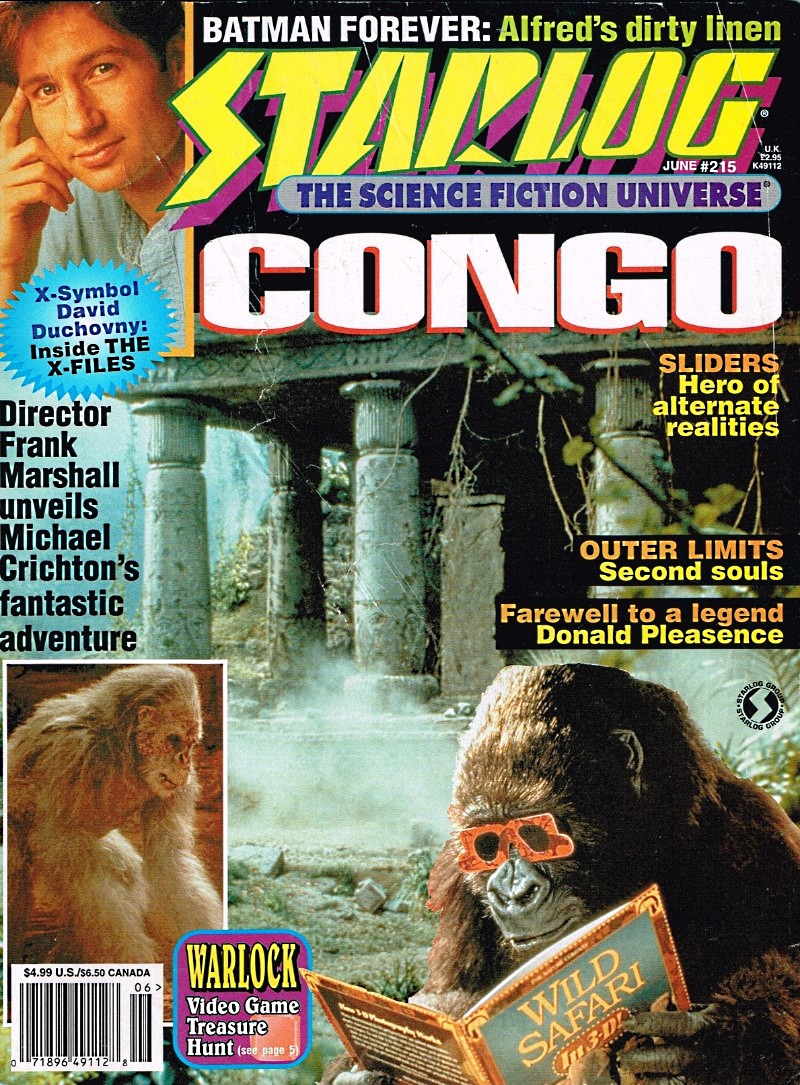 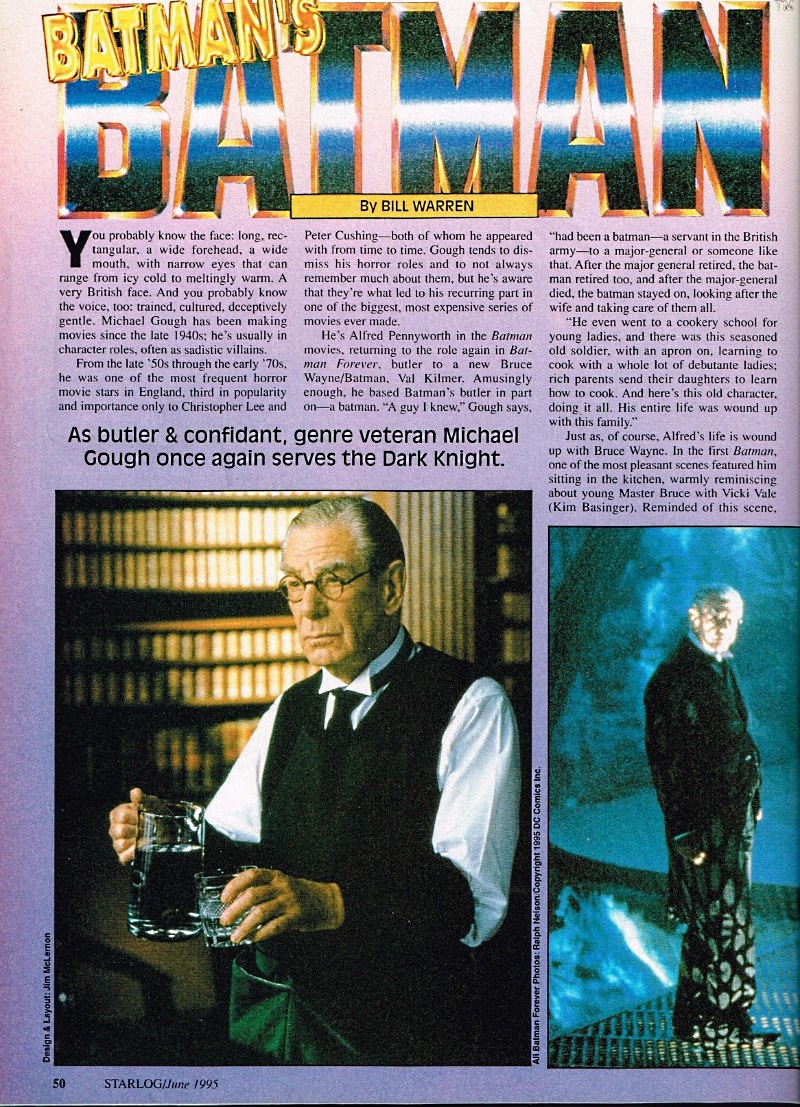 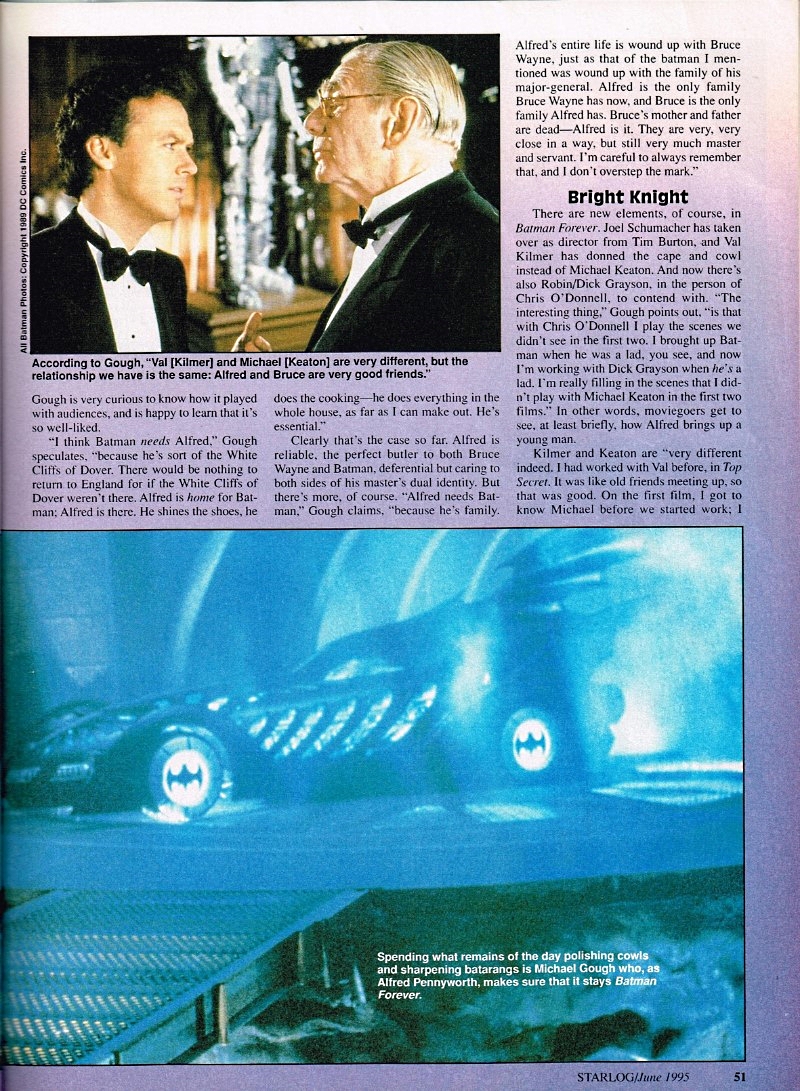 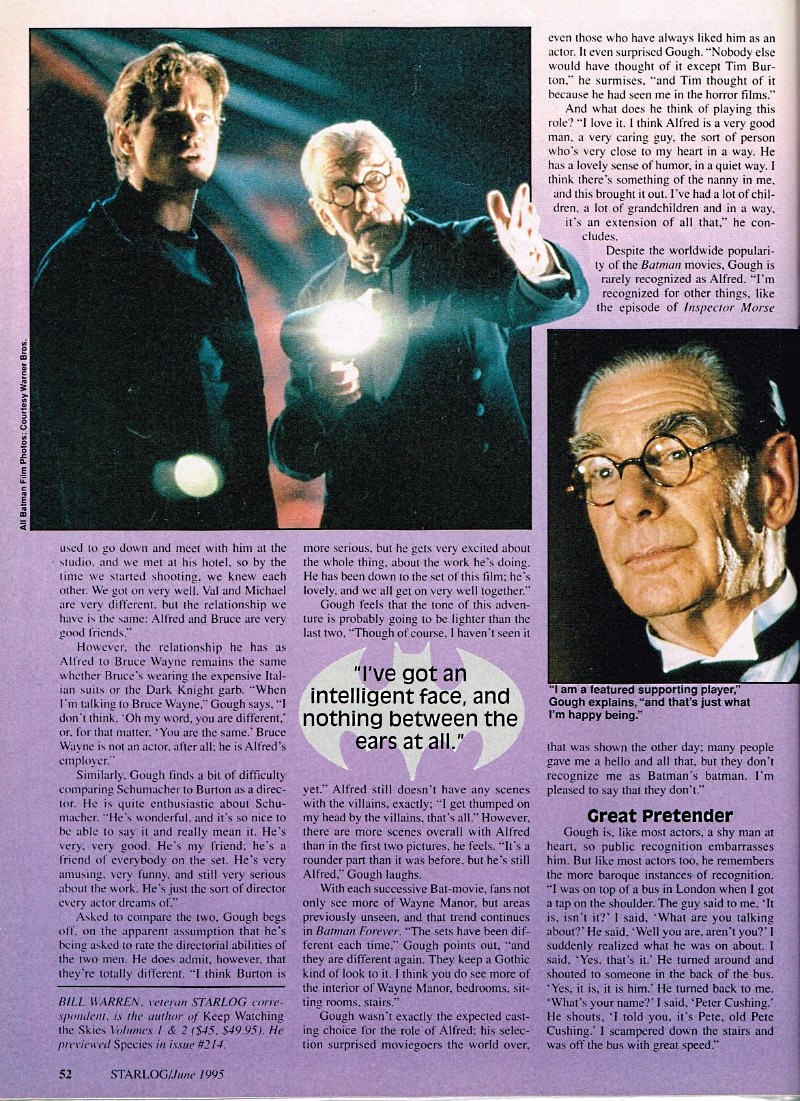 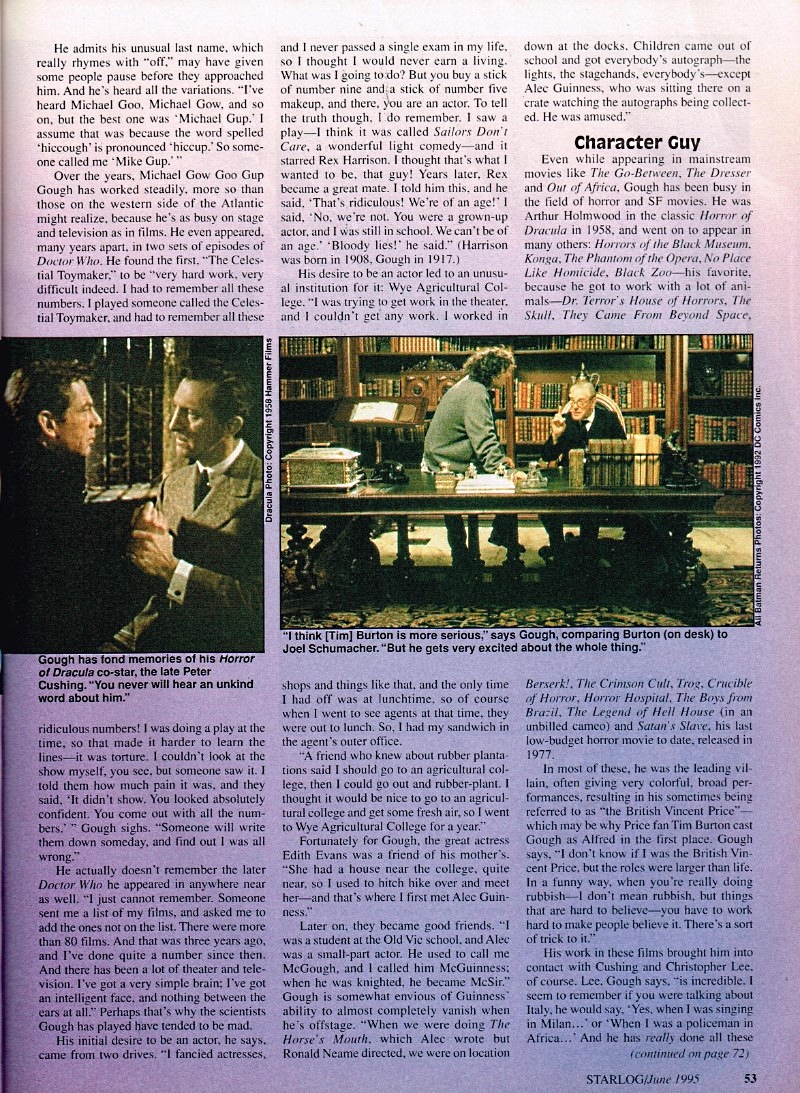 I know a lot of fans of the first two Batman films wish Tim Burton had come back for the third movie. As much as I love Schumacher's version I too would have loved to have seen what Burton would have done with the same material.

Alas Burton was moved to a (largely ceremonial) producer role very early on in Batman Forever's development. Still that hasn't stopped lots of people trying to figure out what it would have looked like.

Here's a treat for you all. Here's the audio book for Batman Forever. It appears to be an abridged version of the novelisation by Peter David.

The book is read by Rene Auberjonois who played Dr Burton in the film (and is probably best known for playing Odo in Star Trek: Deep Space Nine).

There's a few interesting differences at the beginning. First to note is that it begins with the Danny Elfman theme (I guess Elliot Goldenthal hadn't recorded the score yet?).

Chapter 1: Bruce discovering the batcave as a boy.
Chapter 2: Edward Nygma being bullied as a child at school (reminiscent of his first comic appearence in Detective Comics 140).
Chapter 3: Harvey Dent (pre-disfiguration) waiting for Batman to turn up on the Police Rooftop.
Chapter 4: Dr Chase Meridian getting her purse snatched on the streets of Gotham. Dick Grayson and his father, who happen to be nearby, stop the thief and get her bag back.

The rest of the book proceeds as per the film.