Saw this on eBay and had to get it. This is a practice known as "Logo Slapping" when a movie is coming out you start slapping the logo on any product you can get your hands on.
So here we have a little FM radio with the Batman Forever logo pitched at kids. I love how they've tried to hedge their bets and suggest using it as a belt buckle if you're a boy or medallion if you're a girl.
Anyway, needless to say, this is an unessential purchase but watch the video anyway.
at October 30, 2020 1 comment:
Email ThisBlogThis!Share to TwitterShare to FacebookShare to Pinterest
Labels: Batman Forever, belt buckle, fm radio, logo slapping, medallion, Merchandise Review, micro games of america

This week we're looking at the super generically titled Film Review magazine. We've got an interesting interview with Val Kilmer who talks through his career in self deprecating style. He seems genuinely happy with the role (which is at odds with more recent comments he's made). He also stops the interview to halt when the interviewer tries to cheekily hint at the gay connotations of Batman and Robin.

Capping off the feature is a review of the film - 4 stars! 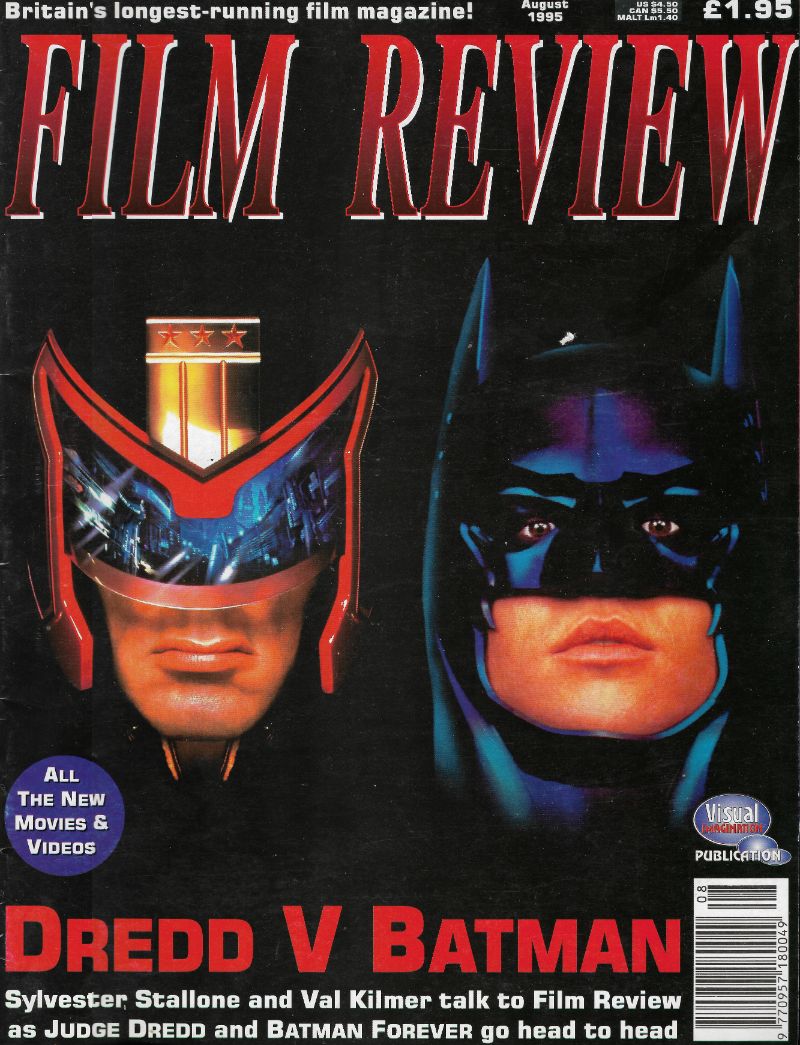 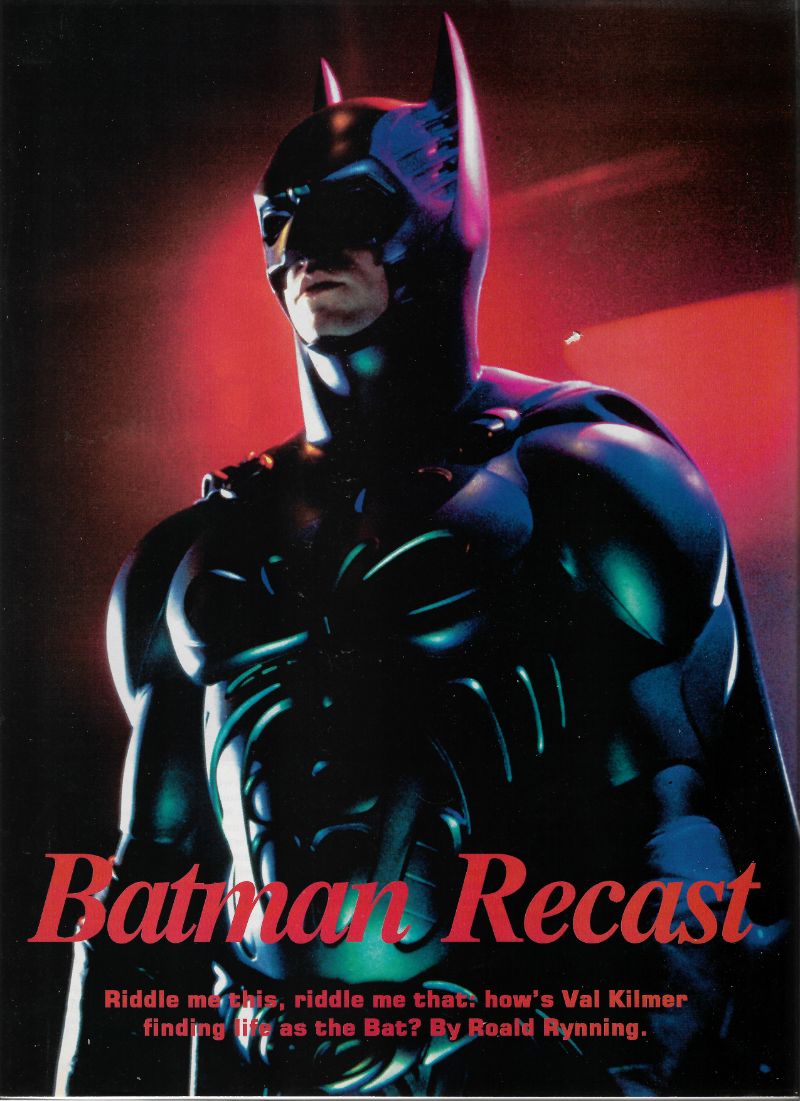 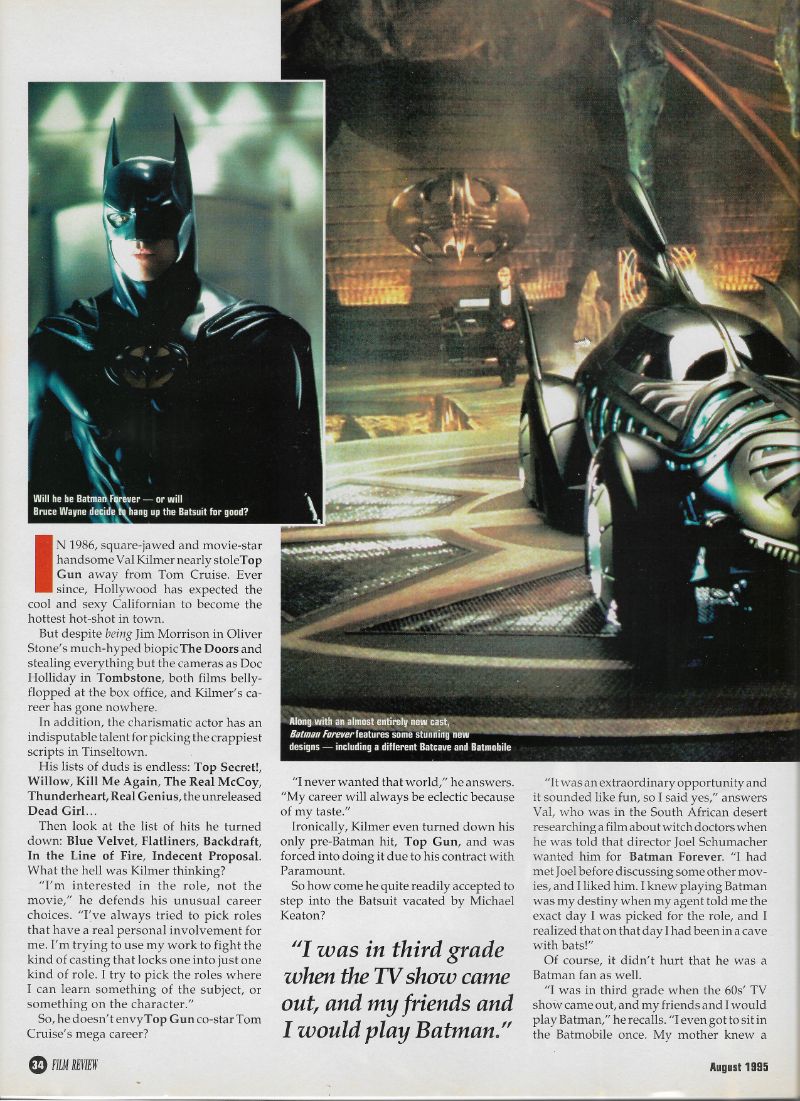 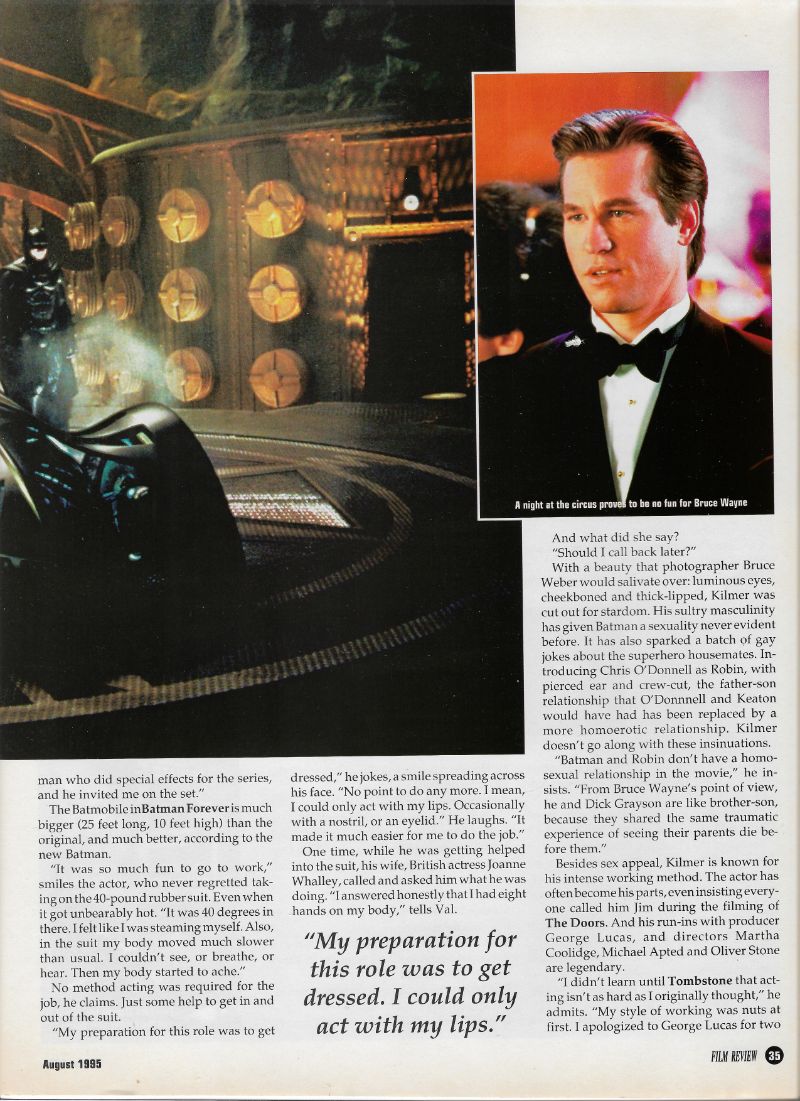 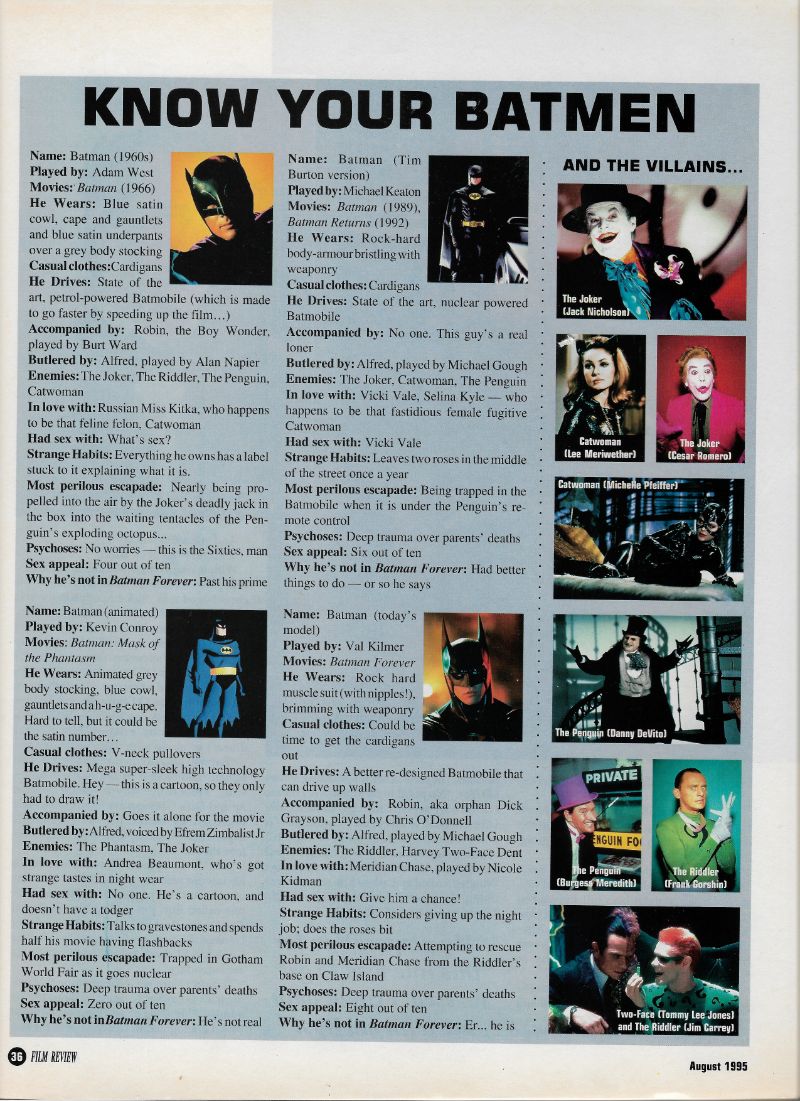 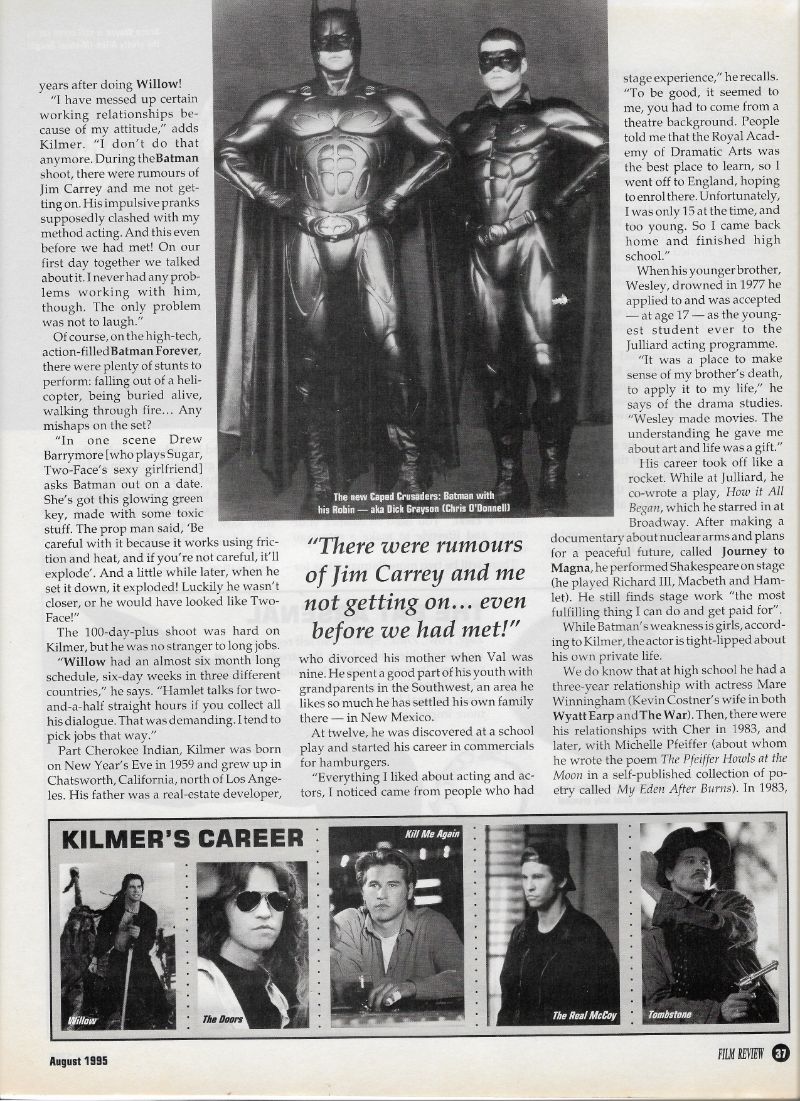 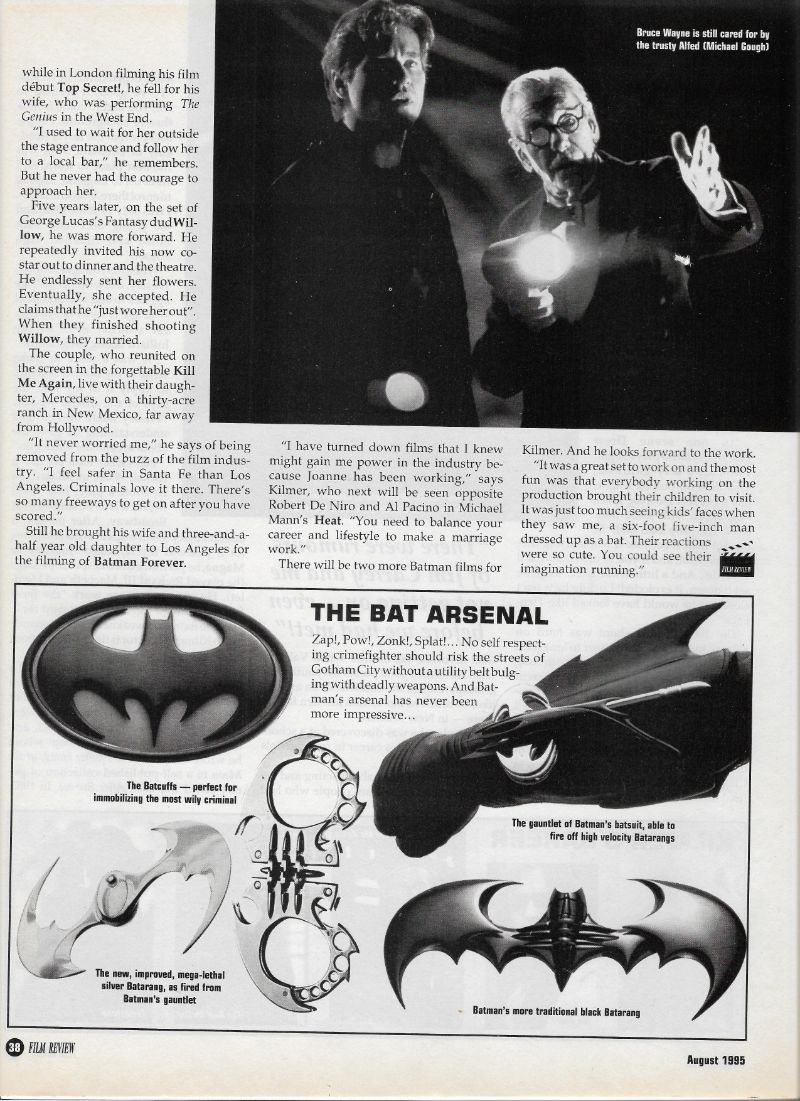 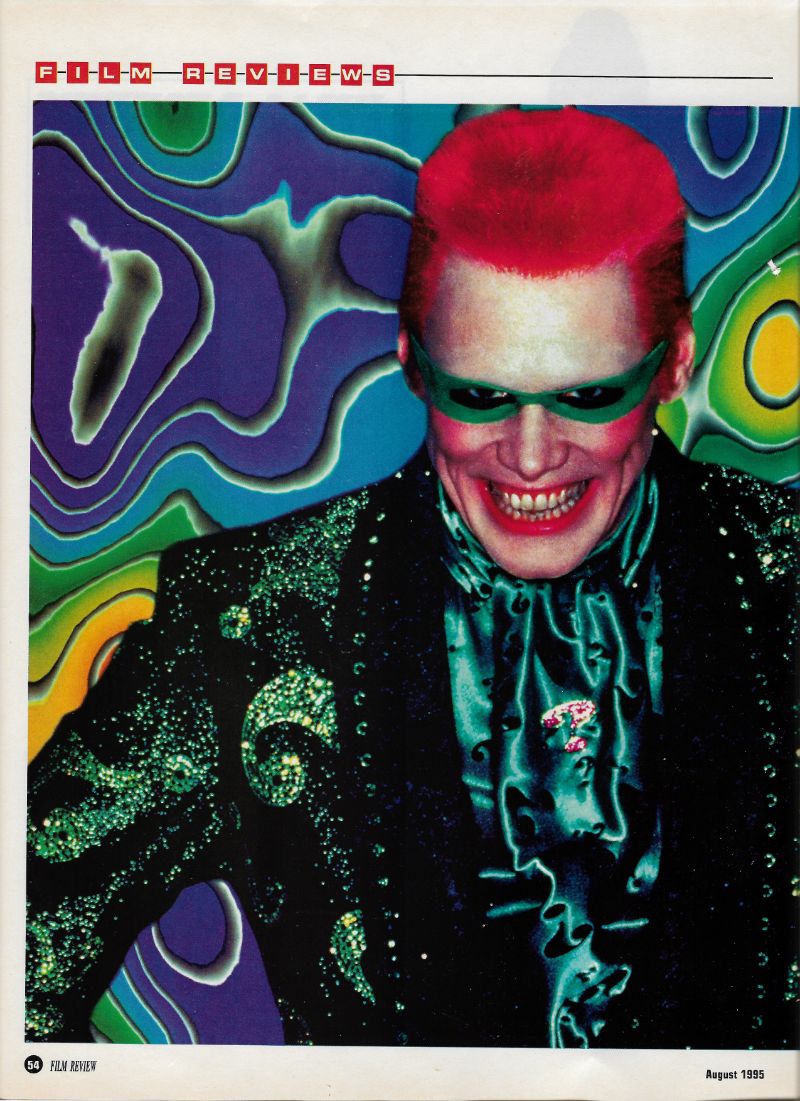 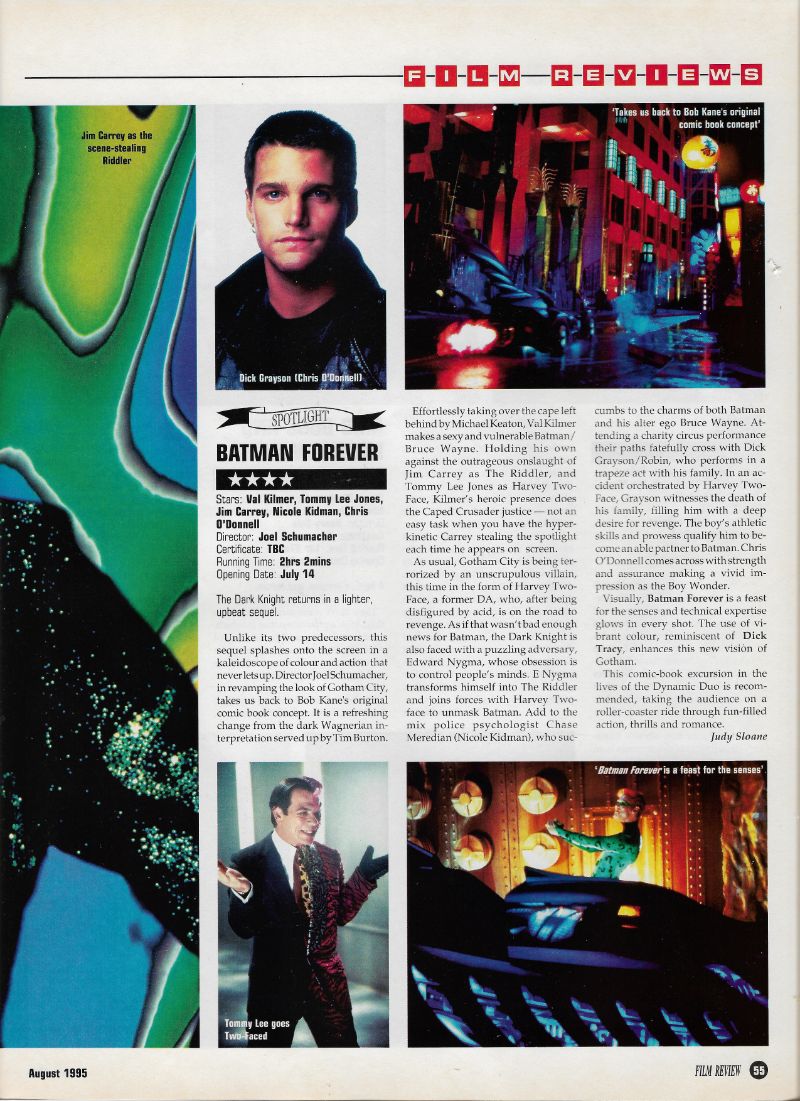 Here's a rare photo of Stephen Goldblatt - the director photography - on the set of Batman Forever with Nicole Kidman setting up a shot (I think) where the camera pulls out of the hole in the bank wall. 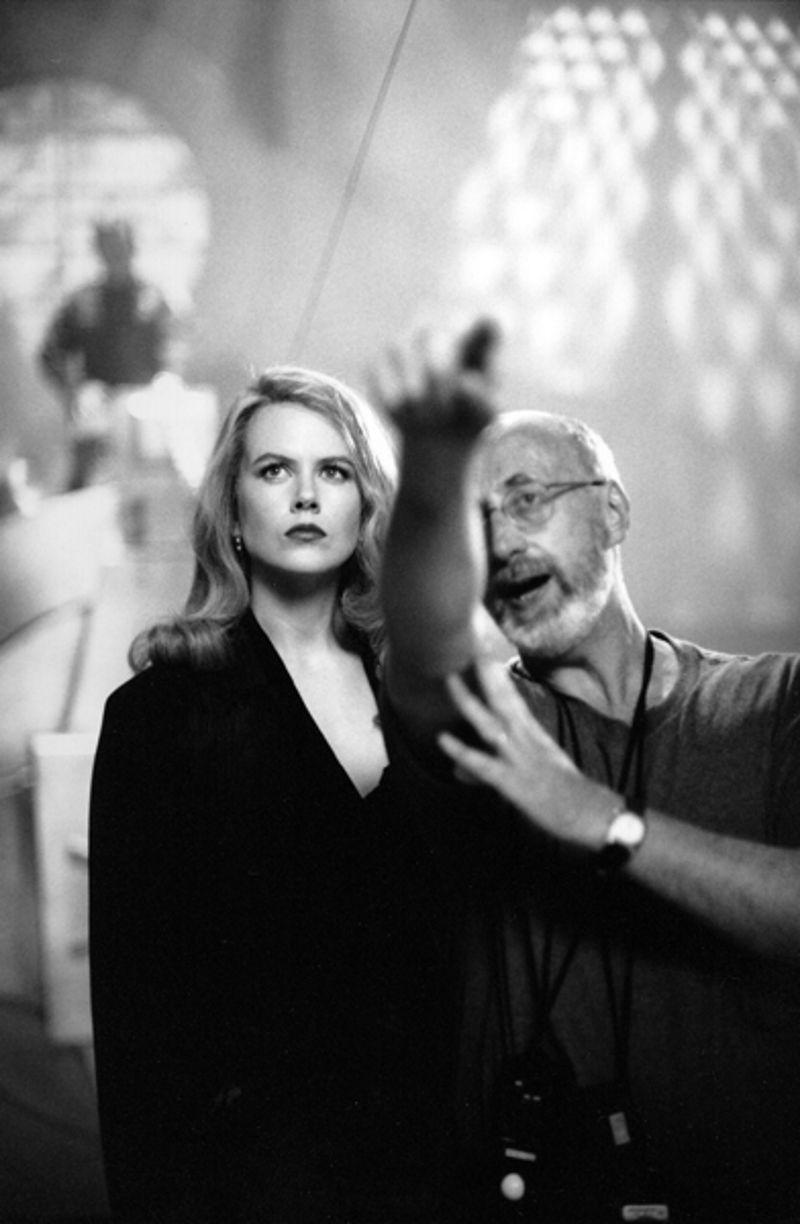 I had a request to cover this on my YouTube channel. This is the Official Movie Book by Michael Singer - a look at the behind the scenes of the movie. Interviews with the cast, concept artwork, behind the scenes photos, thoughts from the crew. Really great stuff.
The practice of making Official Movie Books like this has somewhat faded since it's heyday in the 1990s. Back then, before the internet this WAS the only way to see behind the scenes stuff. Sure it's all sanitised and studio-approved soundbites but
I had this as a kid and absolutely loved pouring over it. Pretty much all of the concept art and interesting pictures I've already scanned for the website. So don't feel like you're missing anything.
As a bonus, I also take a quick look at the books for Batman (1989), Batman Returns and Batman & Robin and I also flick through the Official Magazine of Batman Forever. Again, that has been scanned for this website and can be viewed here.
Anyway, I cannot recommend the Official Movie Book enough. It's a treasure trove of material and copies fly around on eBay, Amazon, Abebooks for pennies. You've got no excuse to have a copy on your shelf.
at October 16, 2020 1 comment:
Email ThisBlogThis!Share to TwitterShare to FacebookShare to Pinterest
Labels: Batman Forever, Behind the Scenes, Merchandise Review, Michael Singer, Official Book, Official Magazine

Here's another Sunday newspaper magazine. This time Chris O'Donnell is on hand to give the gossip on Batman Forever. As always he comes across as fun and energetic in his interviews. One thing I never realised is that he actually had his hair dyed black to play Dick Grayson. 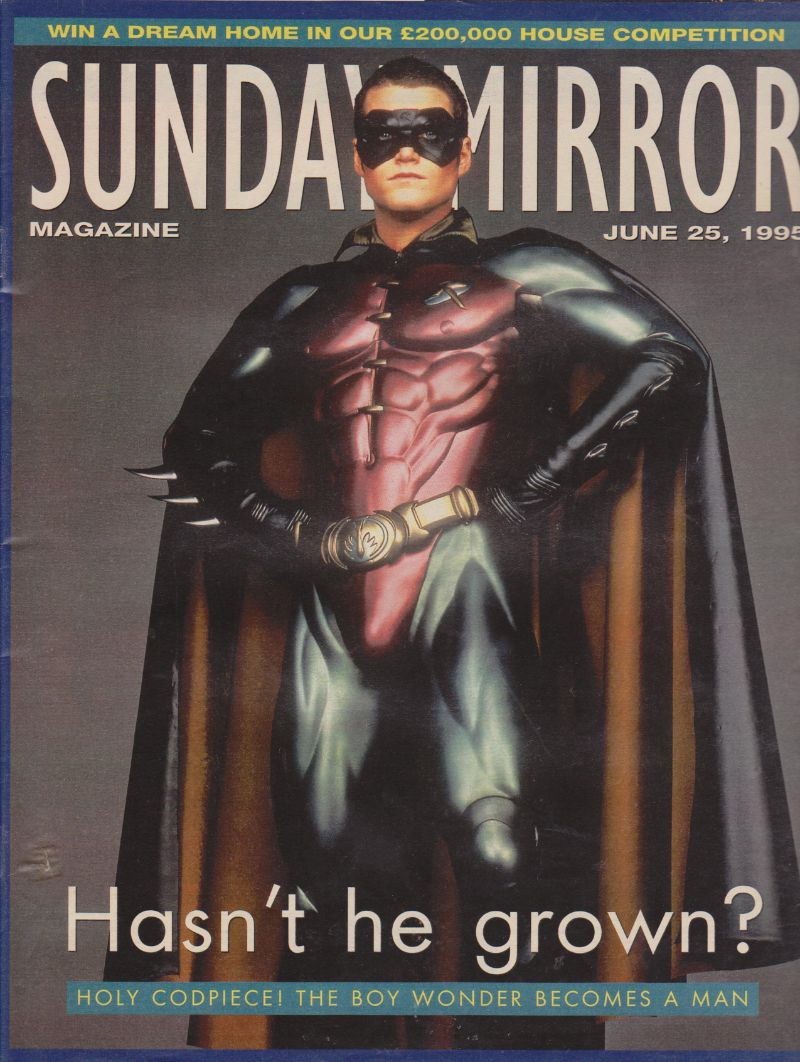 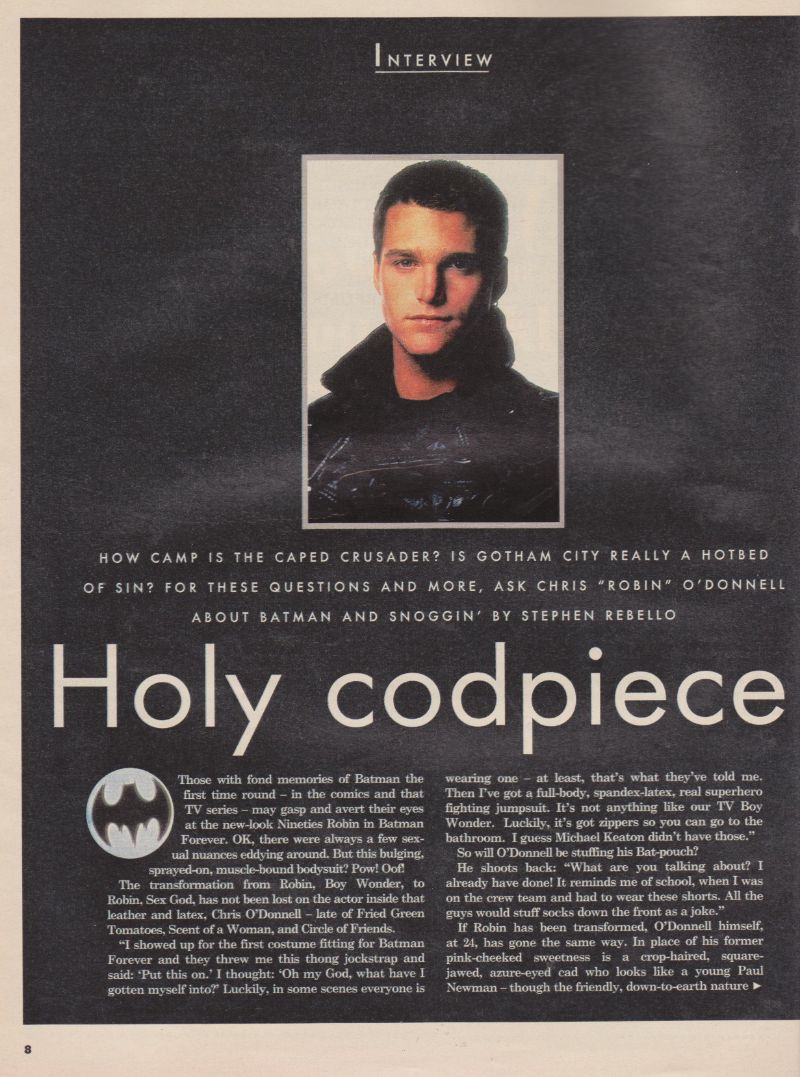 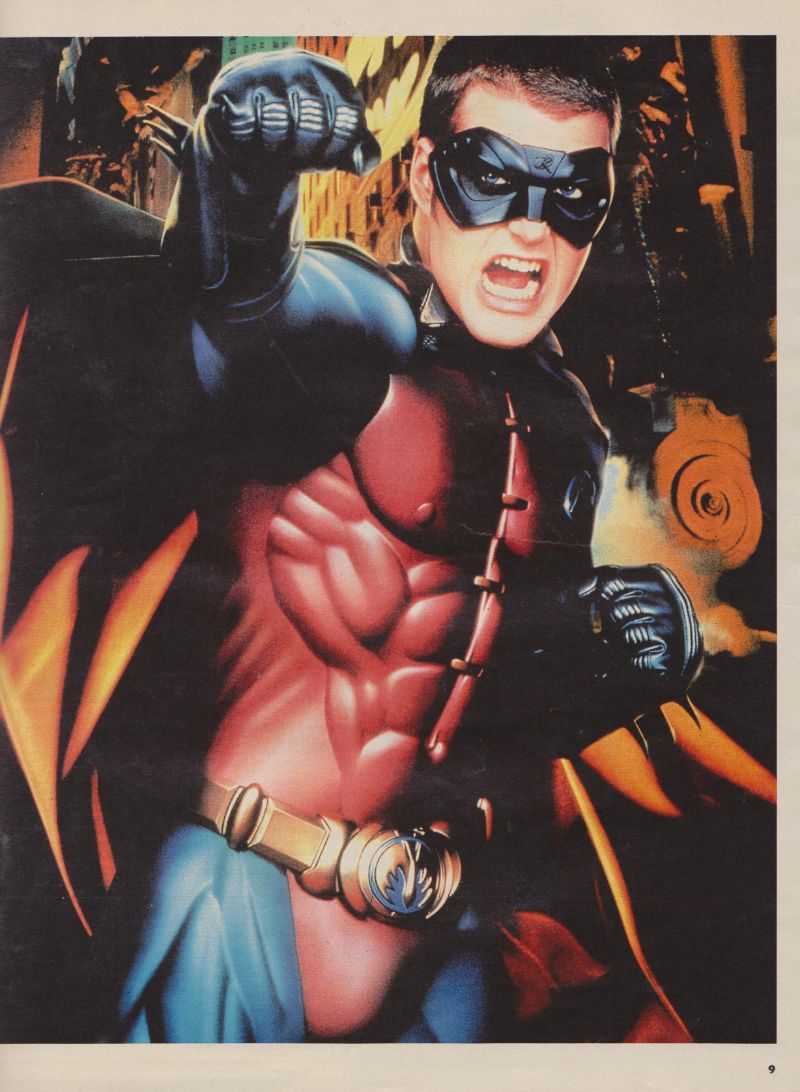 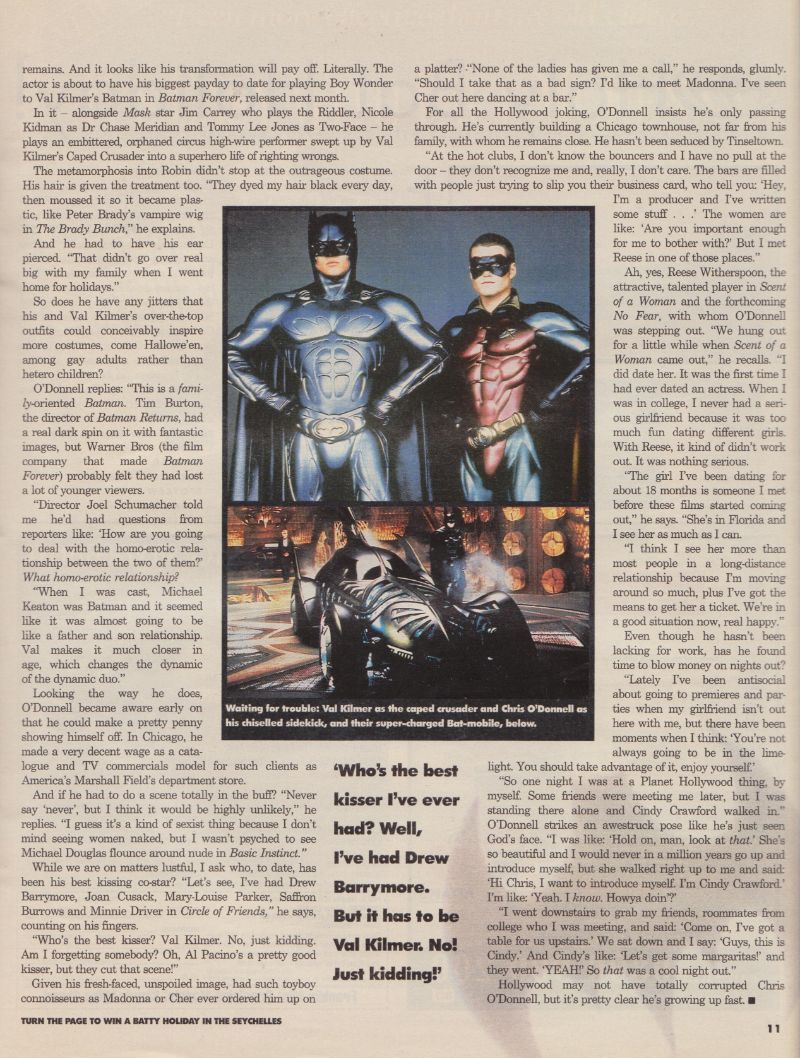 News of the World is a UK tabloid newspaper. This is from their Sunday pull out magazine imaginatively titled... Sunday. It's more of a profile piece on Val Kilmer and Chris O'Donnell's careers rather than looking at Batman Forever. Got to admit it's kind of amusing how trashy it is - getting quoted from "close friends" rather than the actors themselves.

Hope you enjoy the stunning goofy pictures of young Val and Chris. Apologies if this is tough to read, whoever designed this picked a terrible backdrop. 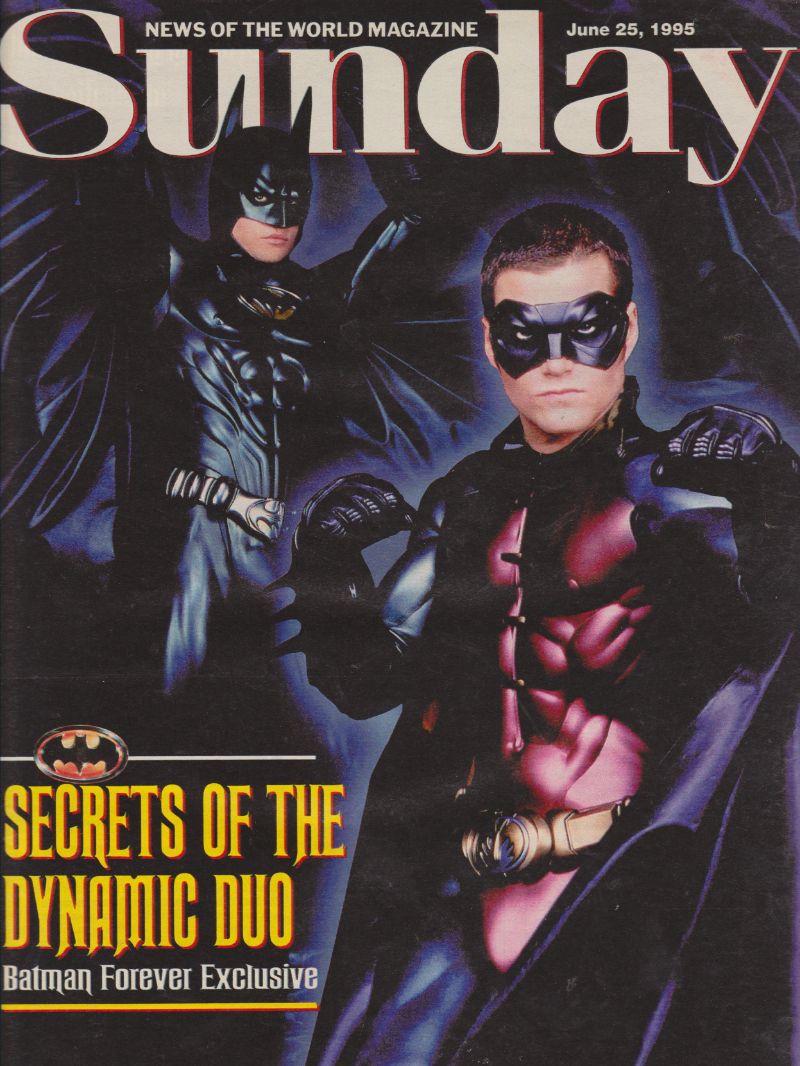 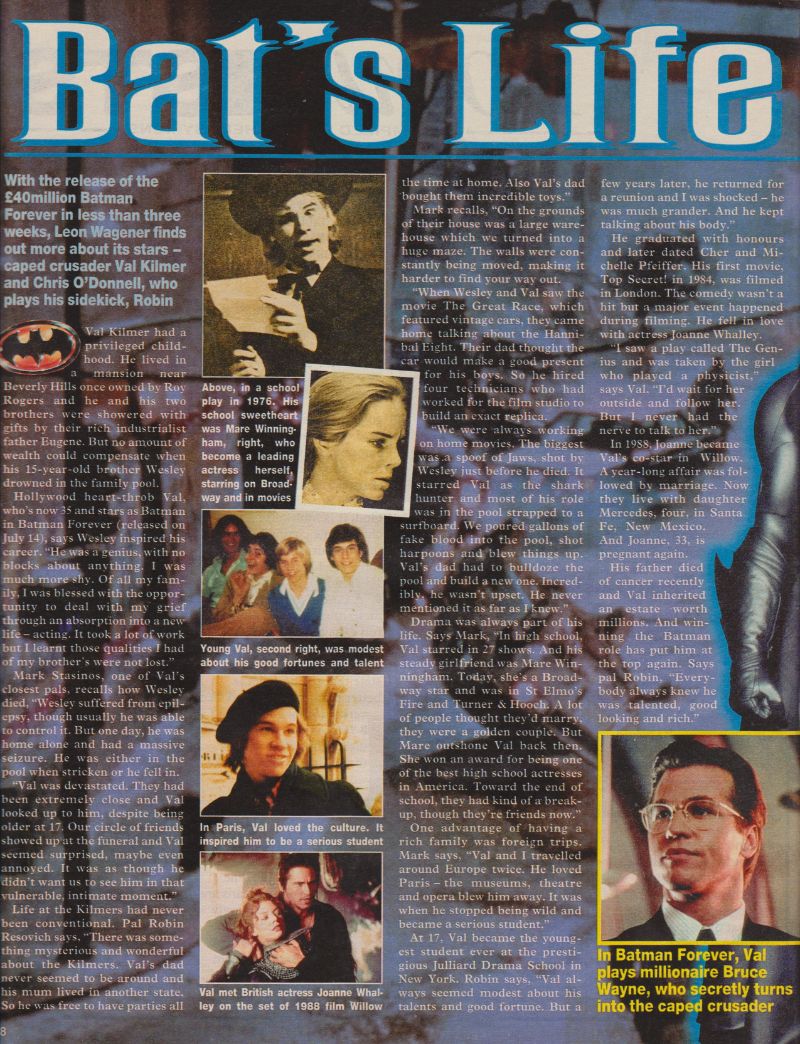 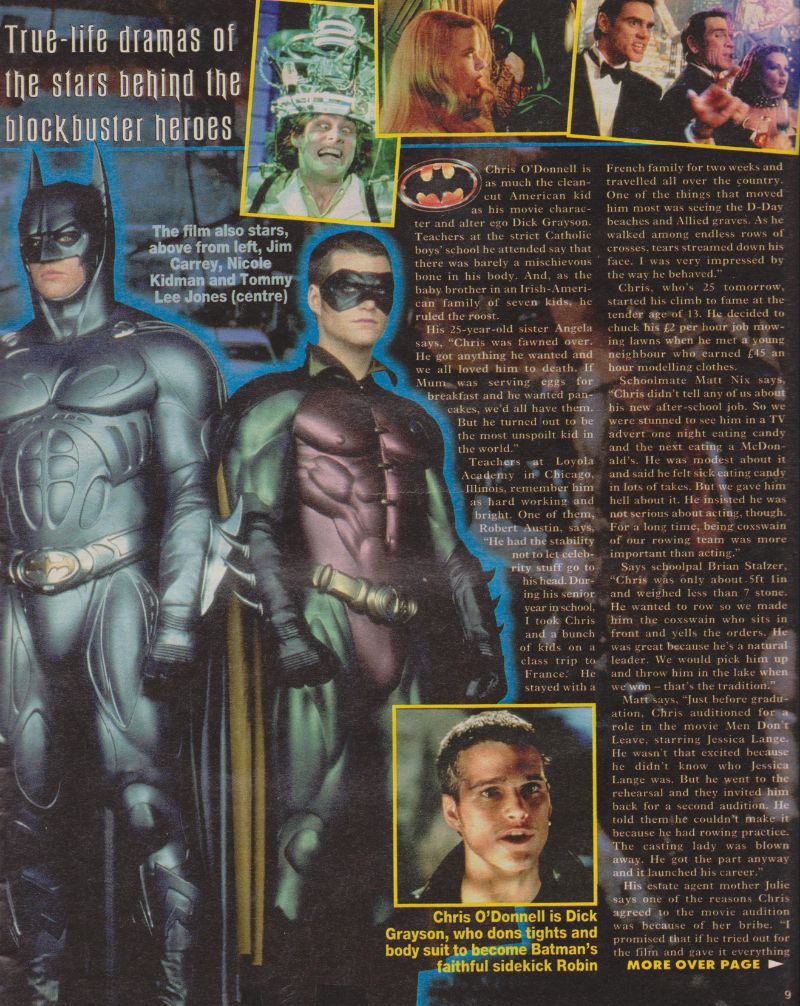 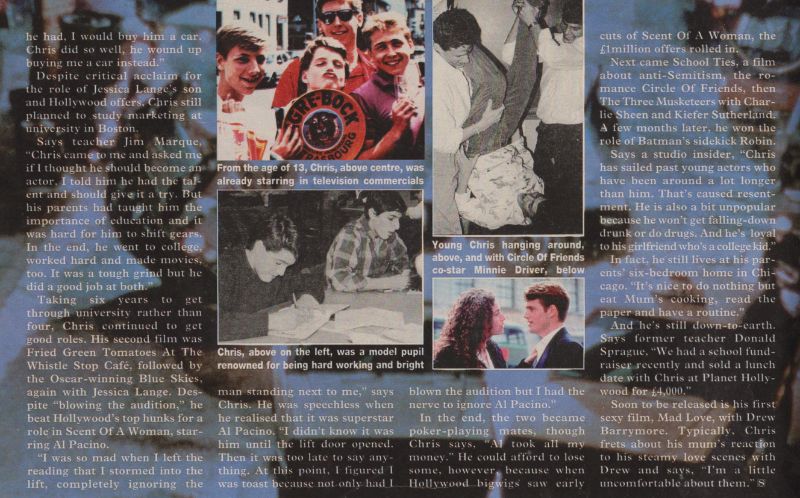 This week we're looking at the Guardians of Gotham 2 pack from Kenner featuring probably the most movie accurate representations of Batman and Robin how they appeared in the movie... well the last 20 minutes anyway.
It's great to have figures that look like how they do in the film but the lunging poses make them a little hard to stand up (Robin in particular is terrible at standing). And the accessories of a tiny grapple and batarang are a little stingy.
Anyway, this is still a must have purchase from the line. If you only want a couple of figures for your shelf to represent the movie, these are the ones you're looking for. Just grab some blu tack.