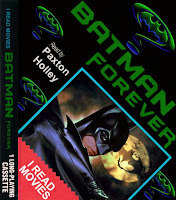 One of the best podcasts that I've been listening to recently is I Read Movies in which host Paxton Holley breaks down all the changes from a movie compared to its novelisation.

Novelisations are fascinating at times because 1) often authors are given licence to include their own material and 2) because they have to start writing so far in advance they will usually adapt the original script which can often differ from what gets shot.

Most recently Pax covered the Batman Forever novelisation by Peter David. If you've never read the book (which can be found as an ebook here) this is a nice way of finding out what's different.

Here's the link to the podcast. Be sure to check out his other episodes too, he's also covered Batman and Batman Returns by Craig Shaw Gardner.