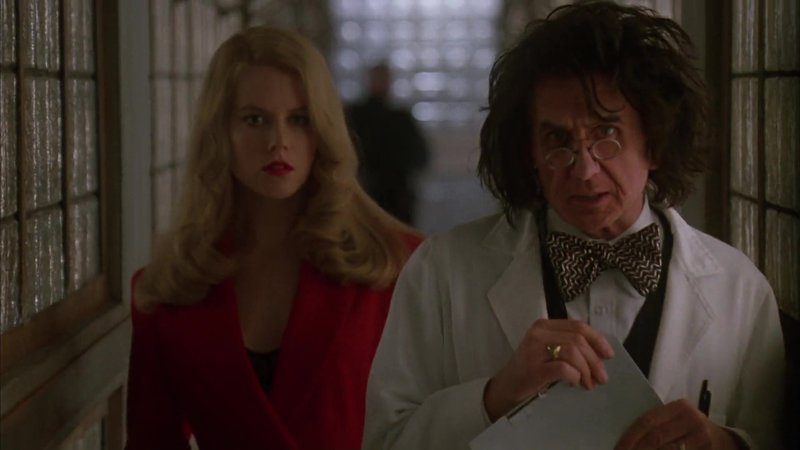 Sad to report that Rene Auberjonois, the actor who played the role of Dr Burton in Batman Forever, has died aged 79 after a battle with metastatic lung cancer. He was probably best known for his role as Odo on all seven seasons of Star Trek: Deep Space Nine.

His role in Batman Forever was a brief cameo at the end accompanying Dr Chase Meridian as she visits Arkham Asylum to see if Edward Nygma still knows Batman's true identity.

Auberjonois also appeared at the beginning of the film when Dr Burton goes to Two Face's cell and discovers he has escaped. This sequence was deleted from the film but is available on the special edition DVD and Blu-ray.

The role was a nod to Tim Burton, director of Batman 1989 and Batman Returns, and as such his hair was styled in Burton's distinctive, manic, whirry look. And Auberjonois adopted a raspy voice that perfectly fits the gothic location.

But of far more importance, Auberjonois also read the audiobook adaptation of Peter David's novelisation of Batman Forever from Time Warner. If you haven’t heard this, please find a link below.

At 3 hours, it is actually longer than the film but has a lot of fun differences. Not least a couple of prologues featuring a teenage Edward Nygma riddling some bullies and Harvey Dent meeting Batman for the first time before becoming disfigured.

Rene Auberjonois' performance was first rate. He particularly excelled at making a much creepier sounding Edward Nygma than Jim Carrey's more live wire performance. Giving us a glimpse at what a more serious version of the film would have felt like (bear in mind this was probably recorded before or as the film was being shot so Auberjonois only had the script and whatever direction he was given to work from).

It takes a great actor to be able to read an audiobook and give distinct and memorable portrayals of all the characters. Batman Forever was even more of a challenge given that each character has a dual personality! As far as I am concerned Rene Auberjonois did a first rate job in his reading.

My thanks go to Rene for such a great performance that has given me so much joy over the years.